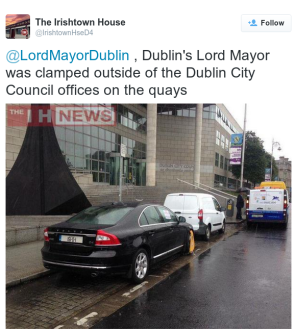 It came from a wreck,

An automobile of dubious ownership

The name on the slip was faded to grey

A man of great substance

No wealth just a whole lot of nothing

The fine was mighty too mighty to care

Put a hole in the tyre, Dear Alfred she

Roared across the divide between her

Do not remove below.

The large giving the name

The small removing the gain

He was a cantankerous man

Of medium height and of lower measure

In the department where thoughts flowed

And dreams were meant to be formed.

It wasn’t they didn’t like him, or even hated

It was more akin to some form of deepest

Despise which permetated their laughter

Clamped Mr Purcell, you have been clamped

The world must surely pause its eternal progress

The powers that be may wait with bated breath

The cats may stop moaning and the dogs stop fooling

Until the problem is solved, the solution found

The raison d’etre is revealed, deduced and recovered

Get me the number of this so called corporation

Dial the digits, man the ford, line up the women

We are going to war and all hell will pay

“You have the auto clamped Mr Corporation man”

“No we haven’t Mister”

“I’ve seen it myself”

“Were you left out for the day?”

Right lads get me a car, a van, a bicycle, whatever

I am heading for the office of the boys in blue

Hold on where’s it gone

The one you showed me not but five minutes ago

No such recollection can I recall

He wondered many a day and a whole lot of nights

But no one would reveal the ghost he lost that day